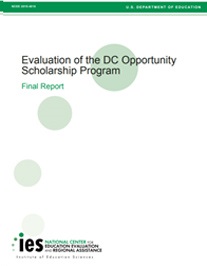 In 2004, Congress established the first federally-funded private school voucher program, with annual funding of about $14 million. The program provided scholarships of up to $7,500 for low-income residents of the District of Columbia to send their children to participating local private schools, with students from "schools in need of improvement" under the Elementary and Secondary School Act receiving the highest priority for admission. This study is in response to the law mandating that the U.S. Department of Education conduct an independent, rigorous impact evaluation of what is now called the DC Opportunity Scholarship Program (OSP).

The evaluation primarily compared outcomes of approximately 2,300 students randomly assigned by lottery to either receive a scholarship or not receive a scholarship. Lotteries of student applicants took place in spring 2004 (for student enrollment in fall 2004) and spring 2005 (for enrollment in fall 2005). Data were collected for four follow up years, for students in both the scholarship and non-scholarship groups. Study-administered academic assessments, as well as student, parent, and principal surveys, were also part of the data collection each spring.

The final report, titled Evaluation of the Impact of the DC Opportunity Scholarship Program: Final Report, along with a study snapshot of findings, was released in June 2010.