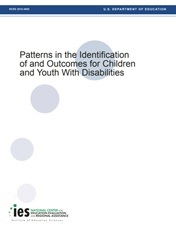 The Individuals with Disabilities Education Improvement Act of 2004 (IDEA 2004) is the most recent authorization of a law passed in 1975 to promote a free appropriate public education for children with disabilities. Funded at $12.6 billion in Fiscal Year 2009 (plus an additional $12.2 billion through the American Recovery and Reinvestment Act), IDEA supports early intervention services for infants and toddlers, special education services for children ages 3 through 21, and early intervening services for students not in special education but in need of academic or behavioral support.

IDEA 2004 emphasizes the early and appropriate identification of children with disabilities and the improvement of outcomes (including performance on state academic assessments) for children receiving IDEA services. This study was part of the National Assessment of IDEA 2004, which was conducted under Section 664 of IDEA 2004 to assess the implementation and effectiveness of key programs and services supported under the law. This study supported the analysis of extant data as a cost-effective means of examining patterns of identification of and outcomes for children with disabilities.

A report, titled Patterns in the Identification of and Outcomes for Children and Youth With Disabilities, was released in January 2010.