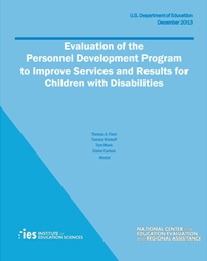 The Individuals with Disabilities Education Improvement Act of 2004 (IDEA 2004) is the most recent authorization of a law passed in 1975 to promote a free appropriate public education for children with disabilities. Funded at $12.6 billion in Fiscal Year 2012, IDEA supports early intervention services for infants and toddlers, special education services for children ages 3 through 21, and early intervening services for students not in special education but in need of academic or behavioral support.

The focus of this study—conducted as part of the National Assessment of IDEA under Section 664 of IDEA 2004 to assess the implementation and effectiveness of key programs and services supported under the law—was the Personnel Development Program to Improve Services and Results for Children with Disabilities (PDP). PDP is funded under Section 662 of IDEA and intends to support the development of early intervention and special education personnel to serve children and youth with disabilities. The PDP supports both national technical assistance centers in the area of personnel development, and training grants to institutions of higher education to develop and maintain courses of study for special education teachers and other service providers. The PDP was funded at $88.299 million in Fiscal Year 2012.

The evaluation relied on a combination of extant data and new data collection from PDP grantees and applicants between fall 2008 and summer 2010. Panels of experts rated the quality and relevance/usefulness of products and services from twelve National Centers funded between Fiscal Year 2001 and Fiscal Year 2007, as well as course-of-study components developed or significantly modified by recipients of PDP training grants awarded in Fiscal Year 2006 or Fiscal Year 2007.

A report, titled Evaluation of the Personnel Development Program to Improve Services and Results for Children with Disabilities, was released in January 2014.