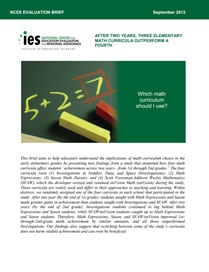 View the brief on final impacts 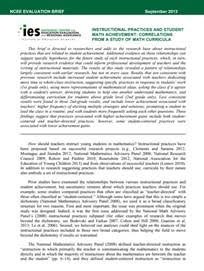 View the brief on correlations

Title I, Part A of the Elementary and Secondary Education Act (as reauthorized in 2001 by the No Child Left Behind Act) is intended to help ensure that all children have the opportunity to obtain a high-quality education and reach proficiency on challenging state standards and assessments. As the largest federal program supporting elementary and secondary education (funded at $13.9 billion in Fiscal Year 2008), these resources are targeted primarily to high-poverty districts and schools.

There has been very little reliable information available to educators and policy makers about which curricula are most likely to improve math performance. This evaluation focused on math curricula for early elementary grades, since disadvantaged children are behind their more advantaged peers in basic math competencies even before entering elementary school.

The evaluation questions were addressed through an experimental design in which schools were randomly assigned to selected math curricula; there was no control group. Math curricula were selected for the evaluation through a competitive process. The math curricula evaluated are widely-used and representative of different instructional approaches, and are appropriate for funding under Title I. The curricula evaluated were Investigations in Number, Data, and Space (Pearson Scott Foresman), Math Expressions (Houghton Mifflin), Saxon Math (Harcourt Achieve), and Scott Foresman-Addison Wesley Mathematics (Pearson Scott Foresman). Implementation of the math curricula and their impact on first-grade student achievement was measured in 4 districts and 39 schools during the 2006–07 school year. Programs were implemented in an additional 71 schools and also in second grade during the 2007–08 school year.

On the relative effectiveness of four math curricula:

On the correlation between instructional practices and math achievement:

An evaluation brief on study correlations, titled Instructional Practices and Student Math Achievement: Correlations from a Study of Math Curricula, was released in September 2013

Reports on the Implementation and Impact of Math Curricula