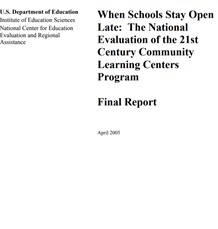 The 21st Century Community Learning Centers Program is a state-administered grant program to provide opportunities for academic enrichment to meet state and local student academic achievement standards in core academic subjects, such as reading and mathematics. This program is authorized as part of Title IV of the Elementary and Secondary Education Act and was funded at $1 billion in Fiscal Year 2008. The funding supports after-school programs and is targeted towards high-poverty schools, with priority given to schools in need of improvement.

Even though the percentage of public schools offering extended-day programs increased from about 13 percent to 47 percent between 1987 and 1999, research on the impact of after-school programs has been inconclusive. The purpose of this national evaluation was to describe the implementation of these programs and to provide high-quality estimates of their impact on student outcomes.

This study had a purposive sample of 26 centers serving elementary school students in 12 districts, and a nationally representative sample of 61 centers serving middle school students in 32 districts. In the elementary school sample, students were randomly assigned to attend the center or not. In the middle school sample, students who attended centers were compared to similar students who did not attend the centers (quasi-experimental design). Students were followed for two consecutive school years beginning in 2000–01.

Data collection included surveys of parents, teachers, and students, examining school records, and administering the Stanford Achievement Test in reading to students. These data were collected at baseline and in two follow-up years to examine students' supervision after school, academic achievement, behavior, developmental outcomes, and feelings of safety after school. These data were compared between students assigned to attend the centers and comparison students to address the study's first two research questions. The third research question was primarily addressed by summarizing implementation data obtained through biannual site visits to centers during each of the two years of the study.