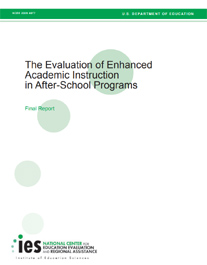 The 21st Century Community Learning Centers Program, established in 1999, is a state-administered grant program to provide opportunities for academic enrichment to meet state and local student academic achievement standards in core academic subjects, such as reading and mathematics. This program is authorized as part of Title IV of the Elementary and Secondary Education Act and was funded at $1 billion in Fiscal Year 2008. The funding is targeted towards high-poverty schools, with priority given to schools in need of improvement.

Building off of a 2005 national evaluation of the 21st Century Community Learning Centers Program in which grantees were found to offer predominantly homework help that did not produce academic impacts, this study evaluated the impact of two structured and intensive academic programs. The two programs were Harcourt's Mathletics and Success for All's Adventure Island. Both programs were designed for the after-school setting, and so a study of these programs could provide valuable information to inform the 21st Century Community Learning Centers Program more broadly.

The evaluation consisted of two parallel studies at the elementary school level (25 programs for each study, one testing the math program—Harcourt Math—and one testing the reading program—Success for All). The evaluation initially included 1,000 students who were randomly assigned to receive treatment and 1,000 to receive the typical support (e.g., general help in a variety of subjects). A subset of the sites continued the program for a second year in which students were randomly assigned a second time to receive one year of treatment in the first year of program operation; to receive one year of treatment in the second year of program operation; to two years of services; and to zero years of the academic program.

The final report, titled The Evaluation of Enhanced Academic Instruction in After-School Programs: Final Report, was released in September 2009.