Charting the Progress of Education Reform: An Evaluation of the Recovery Act's Role 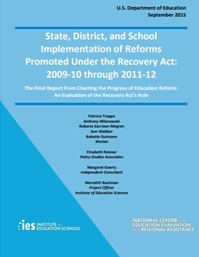 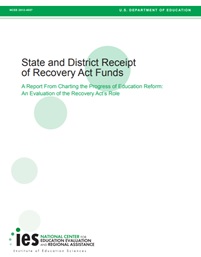 The American Recovery and Reinvestment Act (ARRA) provided an unprecedented $100 billion of funding for the U.S. Department of Education. While the initial goal of this money was to deliver emergency education funding, ARRA was also used as an opportunity to spur innovation and reform at different levels of the education system. In turn, ARRA provided a unique opportunity to foster school improvements and to learn from reform efforts. The purpose of this study was to describe the recipients of ARRA funding and what strategies and supports were implemented with the funding. Although funds were disbursed through different grant programs, their goals and strategies were meant to be complementary, if not overlapping, as were likely recipients of funding. For this reason, data collection and analysis were integrated across grant programs, rather than separately for each set of grantees, allowing for a broad implementation study of ARRA as a whole.

Data were collected from all 50 states, DC, and a nationally-representative sample of districts and schools through the administration of surveys in spring 2011 and spring 2012. Descriptive and correlational analyses made use of both survey and extant data, in order to answer the study's research questions.

The final report, titled State, District, and School Implementation of Reforms Promoted Under the Recovery Act: 2009–10 through 2011–12, was released in September 2015.