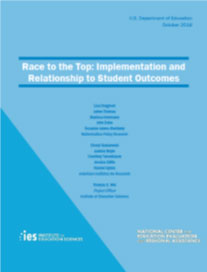 View the final report for RTT 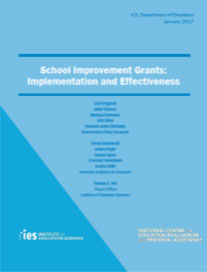 View the final report for SIG

The American Recovery and Reinvestment Act of 2009 (ARRA) was a $831 billion economic stimulus package that included $100 billion for states and districts to secure teachers' jobs and promote innovation in schools. Among the federal education programs that ARRA provided funding for were Race to the Top (RTT, $4 billion) and School Improvement Grants (SIG, $3 billion).

Authorized by Title I, Section 1003(g) of the No Child Left Behind Act of 2001, SIG sought to help improve the nation's persistently lowest-achieving schools. The SIG program received a large influx of more than $7 billion between 2009 and 2016. The specific amount that states received from the U.S. Department of Education was based on Title I formulas. States then competitively distributed the funds to districts applying on behalf of their eligible schools. The first cohort of schools to receive this influx of SIG funds were required to implement one of four prescribed intervention models over three years (2010–11 to 2012–13): transformation, turnaround, restart, or closure.

Given that ARRA made a substantial investment in both the RTT and SIG programs, it is of interest to better understand how the programs were implemented and what impacts they may have had on student outcomes. This evaluation was conducted as part of the Office of Management and Budget's Evaluation Initiative for Fiscal Year 2010. The evaluation focused on the initial general state competition for RTT (with awards in 2010 and 2011) and the first cohort of SIG schools implementing intervention models between the 2010–11 and 2012–13 school years, since these were the parts of the RTT and SIG programs that were primarily funded by ARRA.

The RTT sample included all 50 states and DC. Data from spring 2012 and spring 2013 interviews with all states and DC informed the first evaluation question. The second evaluation question was addressed using a short-interrupted time series design with existing National Assessment of Educational Progress (NAEP) data from 2003 to 2015 for reading and math in grades 4 and 8. State-level NAEP scores were compared both before and after the RTT competition (prior to 2010 vs. after 2011), and between states that were awarded an RTT grant and states that applied for but were not awarded an RTT grant (RTT vs. non-RTT states).

The SIG sample included about 500 schools (both SIG schools and other low-performing schools that did not receive SIG) from 60 districts and 22 states. This sample was purposively selected to support a regression discontinuity design to address the fourth evaluation question. Schools whose performance was just low enough to qualify for SIG were compared to otherwise similar schools whose performance was just high enough to not qualify for SIG. Spring 2012 and spring 2013 data from state interviews, district interviews, and school surveys of the SIG sample informed the third and fifth evaluation questions. Student- and school-level math and reading achievement data in all tested grades from the 2009–10 to 2012–13 school years, as well as high school graduation and college enrollment rates (to the extent available), were also collected from administrative records to inform the fourth and fifth evaluation questions.

Race to the Top

The final report for RTT, titled Race to the Top: Implementation and Relationship to Student Outcomes, along with an interactive exploration of findings, was released in October 2016.

The final report for SIG, titled School Improvement Grants: Implementation and Effectiveness, along with an interactive exploration of findings, was released in January 2017.

Reports on the Implementation of RTT and SIG in Spring 2012