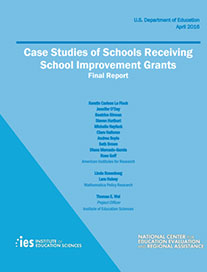 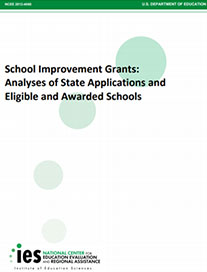 The federal School Improvement Grants (SIG) program was authorized by Title I, Section 1003(g) of the No Child Left Behind Act of 2001. The purpose of the grants was to help turn around the nation's persistently lowest-achieving schools. States received SIG funds from the U.S. Department of Education based on Title I funding formulas. They then competitively distributed the funds to districts applying on behalf of their eligible schools. The first cohort of SIG, which is the focus of this study, received funding beginning in the 2010–11 school year. To qualify for the three-year grant in the first cohort, schools must (among other requirements) have been willing to implement one of four prescribed intervention models: turnaround, restart, closure, or transformation. About $546 million were allocated in FY 2009 for SIG with a supplement of $3 billion from the American Recovery and Reinvestment Act of 2009. With the possibility of rollover funds, this amounted to an initial $3.5 billion injection into the SIG program during the 2010–11, 2011–12, and 2012–13 school years. This study sought to provide descriptively rich and qualitative information for a small but diverse set of schools receiving SIG in the first cohort to implement an intervention model beginning in the 2010–11 school year.

Data collection took place over three school years, beginning in spring 2011 and concluding in spring 2013. Data collection included interviews with each state's SIG leaders, a teacher survey, as well as site visits to the case study schools that included analysis of fiscal records, as well as interviews and focus groups with district officials, principals, teachers, parents, union officials, external support providers, and students. There also were two sets of approximately 10 schools selected for special case studies, with one set focused on SIG schools with a high proportion of English Language Learners (ELL) and another focused on rural SIG schools.

The first report, titled Case Studies of Schools Receiving School Improvement Grants: Findings After the First Year of Implementation, was released in May 2014.

Two data files containing publicly-available information on SIG-eligible and SIG-awarded schools are available for the purposes of secondary analysis.