Survey development for the 2021–22 data collection is underway 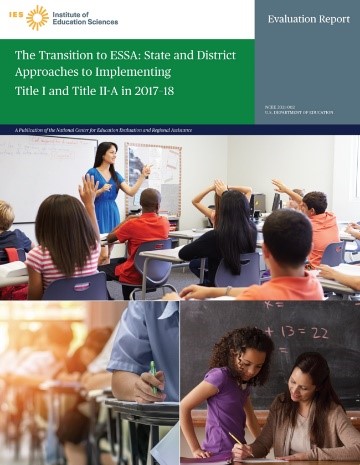 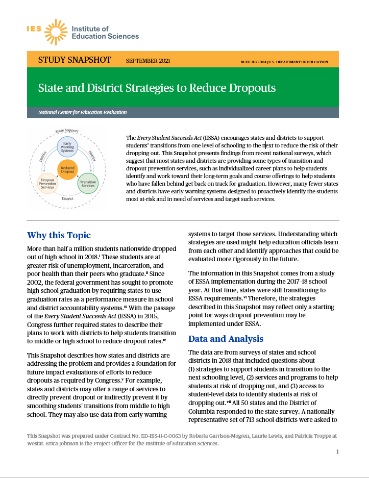 Promoting equal access to high-quality schooling is a central goal of federal education policy. The Title I and Title II-A programs of the Elementary and Secondary Education Act (ESEA) further this goal by providing funds meant to help schools and districts better serve low-income students and improve teacher and principal quality. Some aspects of these two core programs, accounting for three-quarters of ESEA funding, shifted as a result of the law's latest update as the Every Student Succeeds Act (ESSA) in 2015. ESSA shifts authority over many education policies from the U.S. Department of Education to states and localities, while still retaining some federal requirements from prior law. How states and localities respond will determine whether ESSA supports educational improvement as intended. This study provides a national portrait of Title I and Title II-A implementation at three key points:

National data will be collected in 2013–14, 2017–18, and 2021–22. These data include surveys of all state Title I and Title II coordinators and nationally-representative samples of districts, and in some of the data collections, surveys of schools and teachers within those districts. The evaluation also draws on existing data, such as state-level student achievement data from Department data sources as well as information from ESSA state plans. Responses to survey questions will be tabulated into descriptive statistics (such as percentages) and simple statistical tests (such as tests for differences between percentages). These tabulations provide a snapshot at each time point, and describe aggregate changes over time.

From the second report based on data collected during the 2017–18 school year (transition to ESSA):

Additional reports and snapshots are expected to be published in 2021 and 2024. The key findings will be updated when those products are released.

The second report, titled The Transition to ESSA: State and District Approaches to Implementing Title I and Title II–A in 2017–18, was released in December 2020.

A snapshot, titled How States and Districts Support Evidence Use in School Improvement, was released in June 2020.

The first report, titled Implementation of Title I and II-A Program Initiatives: Results from 2013–14, was released in January 2017.

A restricted-use file containing de-identified data from the 2013–14 data collection is available for the purposes of replicating study findings and secondary analysis.