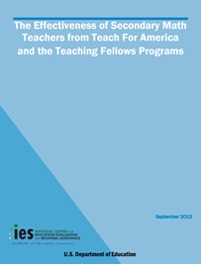 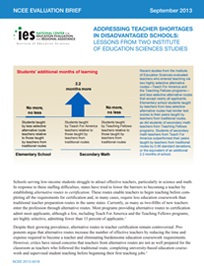 Title II, Part A, the Improving Teacher State Formula Grants program, is the primary federal funding under the Elementary and Secondary Education Act to support a high-quality teacher in every classroom. The program, funded at $2.9 billion in Fiscal Year 2008, targets high-poverty districts and funds a broad array of allowable activities such as support for certification including alternative certification.

Highly-selective programs that provide alternative routes to teacher certification are viewed by some policymakers as important tools for recruiting prospective teachers, particularly in critical subject areas like secondary school math in which teacher shortages are common. Little is known, however, about the effectiveness of teachers in those programs, especially at the secondary level. This study aimed to fill that knowledge gap by focusing on secondary math teachers from the two largest highly-selective routes to alternative certification: Teach For America (TFA) and the Teaching Fellows programs fostered by The New Teacher Project (TNTP).

This study used an experimental design in which students were randomly assigned to a class taught by a math teacher from the program being studied (TFA or Teaching Fellows) or to a similar math class in the same school taught by a teacher who did not participate in either of the programs studied. Approximately 80 schools in 15 districts were recruited to take part in the study, with a focus on roughly 300 secondary school math teachers and approximately their 17,000 students.

On Teach For America and Teaching Fellows:

From a brief synthesizing lessons learned from this study and another study focusing on teachers from less-selective routes to alternative certification:

A report, titled The Effectiveness of Secondary Math Teachers from Teach For America and the Teaching Fellows Programs, along with a study snapshot and video recap, was released in September 2013.

An evaluation brief, titled Addressing Teacher Shortages in Disadvantaged Schools: Lessons From Two Institute of Education Sciences Studies, along with a video of a forum on the brief, was released in September 2013.