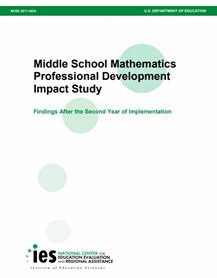 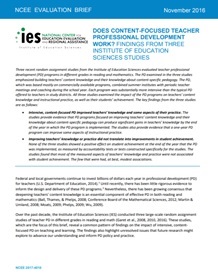 Title II, Part A, the Improving Teacher State Formula Grants program, is the primary federal funding under the Elementary and Secondary Education Act to support a high-quality teacher in every classroom. The program, funded at $2.9 billion in Fiscal Year 2010, targets high-poverty districts and funds a broad array of allowable activities such as support for certification including alternative certification, teacher mentoring and induction, intensive professional development, recruitment, retention, and merit-based teacher and principal pay strategies as well as class size reduction. This study of math professional development provided by America's Choice and Pearson Achievements Solutions provides an important source of information for the professional development aspect of the Title II program.

Professional development is argued by experts to be an important strategy to improve schools through increasing teacher quality. This evaluation focused on 7th grade mathematics and provided teachers with professional development (PD) designed to enhance their teaching of rational numbers topics: fractions, decimals, ratios, proportions, and percents.

In the first year, the PD intervention consisted of a 3-day summer institute, five day-long seminars during the school year, and 10 days of additional coaching support. In the second year, the PD consisted of three day-long seminars to reinforce the content delivered in the first year. A 2-day summer institute in the second year was offered to those 7th grade teachers who were new to study. The PD focused on both math content and math pedagogy. A pilot in 3 districts took place during the 2006–07 school year. The full study was conducted in 12 districts and 88 schools in 2007–08 and in a subset of these schools in 2008–09 (6 districts and 39 schools). Middle schools in each district were randomly assigned to receive the treatment or the professional development normally provided by the district (the control condition). All eligible 7th grade math teachers within the treatment schools were offered the professional development.

Data collection occurred in school years 2007–08 and 2008–09 and included measures of the professional development implementation, teacher knowledge and practice, and student achievement.

On the Math PD Program:

The final report, titled Middle School Mathematics Professional Development Impact Study: Findings After the Second Year of Implementation, was released in May 2011.

Reports on Implementation and Impacts of the Math PD