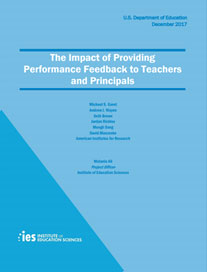 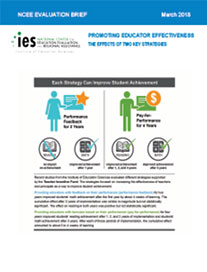 Eight districts participated in the study. Within each district, approximately 15 schools were randomly assigned to receive the study's intervention during 2012-2013 and 2013-2014, or to participate only in the district's usual performance evaluation system during the same time period. In intervention schools, each year, teachers of reading/English language arts and mathematics in grades 4 through 8 received four rounds of classroom observations and feedback sessions, based on one of two observation rubrics (the Framework for Teaching or the CLASS). District preference determined which rubric was used. These teachers also received information about their students' achievement growth in math and/or reading using a statistical model known as value-added. Principals in intervention schools received feedback on their performance based on the VAL-ED, which was administered twice per study year. The VAL-ED is an assessment of principals' leadership practices based on survey responses from the principal, their teachers, and their district supervisor.

The study used online vendor systems (e.g., Teachscape's system for tracking observations conducted using the Framework for Teaching rubric and producing performance reports for those observations) to look at the extent to which district implementation of the measures was as intended and whether ratings from the measures reliably distinguished performance. Based on principal and teacher survey data collected in the spring of each of the two study years, the study examined the extent to which educators' experiences and perceptions regarding performance evaluation differed between treatment and control schools. Impacts on teacher practices were measured through classroom observations conducted by the study team in the spring of the second year of implementation. Impacts on principal leadership were measured through survey reports of teachers in treatment and control schools in the spring of each of the two implementation years. Finally, impacts on students' achievement were estimated based on test score data from district records collected for both study years.

The final report for the study, titled The Impact of Providing Performance Feedback to Teachers and Principals, was released in December 2017.