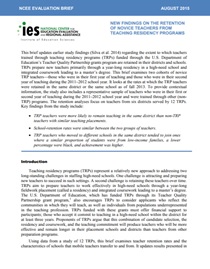 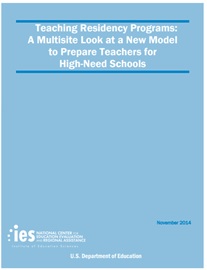 For many teachers, the early years represent a difficult transition period—first-year teachers tend to be less effective classroom teachers than their experienced counterparts, and newer teachers are more likely to leave the profession. These difficulties are often attributed to lack of adequate teacher preparation and support, issues that teaching residency programs (TRPs) are designed to address. TRPs involve a year-long "clinical" experience (the "residency") shadowing and co-teaching with an experienced mentor. TRPs also provide continued support and mentoring after participants become teachers of record. Before and during their residencies, participants in TRPs take coursework, usually resulting in a master's degree.

This evaluation provides important descriptive and implementation information on TRPs, as well as information on the teacher retention outcomes of teachers who participate in TRPs. The evaluation focused on TRPs that received grants from the Teacher Quality Partnership (TQP) Program in fall 2009 and spring 2010. The evaluation is authorized in Title II, Part A of the Higher Education Act, as amended by the Higher Education Opportunity Act (Public Law 110-315, Section 201 - 204). The TQP program, funded at $43 million in Fiscal Year 2009, received an additional $100 million in funds as part of The American Recovery and Reinvestment Act of 2009.

Descriptive information on TQP grantees operating TRPs was collected through a survey administered in spring 2012. More detailed implementation information was collected through TRP program director interviews and surveys of residents and mentors, conducted within a subset of TRPs during spring 2012. Teacher mobility was tracked through district records and teacher surveys in order to examine retention in the profession, district, and school among novice TRP and novice non-TRP teachers in a subset of six districts.

A report, titled Teacher Residency Programs: A Multisite Look at a New Model to Prepare Teachers for High-Need Schools, was released in November 2014.

An evaluation brief, titled New Findings on the Retention of Novice Teachers From Teacher Residency Programs, was released in August 2015.