An Evaluation of Teachers Trained Through Different Routes to Certification 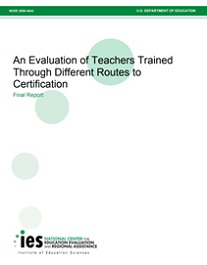 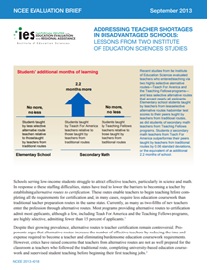 Title II, Part A, the Improving Teacher State Formula Grants program, is the primary federal funding under the Elementary and Secondary Education Act to support a high-quality teacher in every classroom. The program, funded at $2.9 billion in Fiscal Year 2008, targets high-poverty districts and funds a broad array of allowable activities such as support for certification including alternative certification. This evaluation studied alternative certification routes with common features and thus provides an important source of information for this program.

A pair of new teachers in the same grade was formed at each of 80 schools included in the study, with one teacher pursuing certification through the traditional route and one the alternative route. Students were randomly assigned to teachers in the pair. A comparison of the outcomes within the teacher pairs, informed the first research question. Exploiting the variation in program coursework requirements within the AC routes included in the sample and comparing with their traditional route counterparts provided information about the second research question. Data collection began in 2004 and included student records, pre- and post-test scores, and measures of teacher practice. The study sample included 1 year of data collection for two teacher cohorts (cohort 1 in school year 2004–05, and cohort 2 in school year 2005–06).

From a brief synthesizing lessons learned from this study and another study focusing on teachers from highly-selective routes to alternative certification:

A report, titled An Evaluation of Teachers Trained Through Different Routes to Certification, was released in February 2009.

An evaluation brief, titled Addressing Teacher Shortages in Disadvantaged Schools: Lessons From Two Institute of Education Sciences Studies, along with a video of a forum on the brief, was released in September 2013.