The Louisiana Believe and Prepare Educator Preparation Reform: Findings from the Pilot and Early Implementation Years 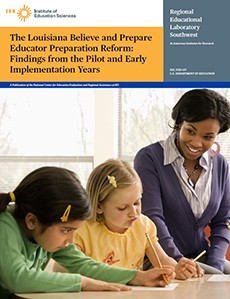 A central requirement of the reform is that teacher candidates must participate in a yearlong residency with a mentor teacher. This replaced the prior shorter-term student teaching requirement, typically six weeks. To explore the extent to which the reform is contributing to expected improvement in outcomes for early career teachers, this study examined the association between the reform and in-service teacher performance ratings, teacher retention, student test scores, teacher competency, and the likelihood of three placement outcomes (being placed in the school where the teacher completed a residency, filling a teaching position in a shortage area, and being placed in a rural school).