by Shannon Lasserre-Cortez and Patrick Wolf 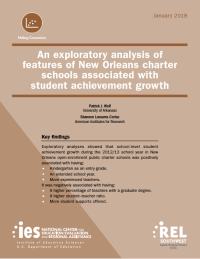 In the wake of Hurricane Katrina, the number of charter schools in New Orleans has rapidly expanded. During the 2012/13 school year--the period covered by this study--of the 85 public schools in New Orleans, 75 were chartered, enrolling more than 84 percent of all public school students in the city in 92 different school campuses. This study explored organizational, operational, and instructional features of New Orleans charter schools serving grades 3-8 that are potential indicators of student achievement growth in English language arts (ELA), math, and science. The organizational characteristic of kindergarten provided as an entry grade was associated with higher levels of [value-added measures] VAM on the ELA test. The operational characteristic of an extended school year also was associated with higher levels of ELA VAM. The instructional characteristics of a lower percentage of teachers with graduate degrees, more experienced teachers, and a lower student/teacher ratio were associated with higher levels of ELA VAM. The analysis revealed fewer potential key indicators of charter school effectiveness regarding VAM in math and science. The inclusion of kindergarten as an entry grade was the only school feature that was statistically significant in its association with math VAM; schools with kindergarten were correlated with higher math VAM scores. Having a lower student/teacher ratio and fewer staff in student support roles were the only school features that were statistically significant in their association with higher science VAM scores. None of these associations between potential key indicators and math and science VAM scores remained statistically significant when estimated using 2013/14 outcome data, indicating that the results are not robust to such an additional analysis. Offering kindergarten as an entry grade and having a lower teacher/student ratio were the only potential key indicators with statistically significant associations with more than one VAM outcome. Having kindergarten as an entry grade was positively associated with ELA and math VAM. Having a lower teacher/student ratio was associated with higher ELA and science VAM. Contains appendices.