From the Director's Office 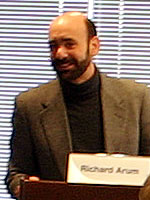 Richard Arum, NYU professor and co-author of Academically Adrift: Limited Learning on College Campuses, recently discussed with IES staff the methodology, key findings, and policy recommendations outlined in his much-talked about book on academic learning in higher education. Arum and Academically Adrift co-author Josipa Roska of the University of Virginia found that students are not making adequate gains in academic achievement at many colleges and universities across the country and that the biggest differences in student achievement are found within a university rather than between universities.

These findings are based upon results gleaned from student scores on the Collegiate Learning Assessment (CLA), a test aimed at measuring critical thinking, analytical reasoning, and written communication. The CLA gathers data on students' abilities to master general, skill-based competencies. It was administered to over 2,000 traditional-aged students at 29 diverse colleges and universities at the beginning of their freshman year and again during their sophomore year.

Students were also asked to complete a survey containing questions related to study habits, the amount of reading required for different courses, and the number of courses that require 20 pages or more of writing per semester.

Arum argued that colleges and universities should focus more on improving student learning. He also advocated for more training in the profession of teaching for college professors who he described as too often willing to rely solely on their subject-matter expertise at the expense of effective teaching.