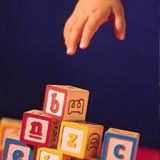 Preschoolers who spend most of their class day engaged in unstructured free play make smaller gains in early math and language skills when compared to peers who spend more time interacting with their teachers on a variety of other activities, according to a new study by the IES-funded National Center for Research on Early Childhood Education.

The study also found that low-income children in particular do better in a program that concentrates on individual learning, with more time spent on teacher-directed activities focused mostly on fine motor skills and early literacy.

"If early childhood education is to level the playing field by stimulating children's academic development, more quality instructional time spent with teachers and less free play time without teacher guidance may prepare children better for starting kindergarten," lead researcher Nina Chien said, in announcing the publication of the research in the recent issue of the academic journal Child Development.

The study was based on a secondary analysis of data gathered from 2,700 children enrolled in public prekindergarten programs in 11 states, more than half of whom are from low-income families. The researchers analyzed qualitative data of "snapshots" that used moment-by-moment observations to categorize children according to the types of settings in which they spent the bulk of their school day. Overall, children spent an average of 45 minutes of their 2.5 hour prekindergarten day in free play. In contrast, less than 8 minutes a day were devoted to literacy activities of reading, letter-sound recognition, and being read to.

This study builds on an emerging body of research that suggests the quality of a preschool experience can be addressed by focusing more on teacher interaction and less on the physical features and layout of the classroom—for example, the learning stations for dramatic play, scientific exploration, art and literacy. The findings suggest that while free play and exploration can contribute to children's overall development and learning, by itself, too much free play and exploration can weaken children's preparation for kindergarten, researchers say.