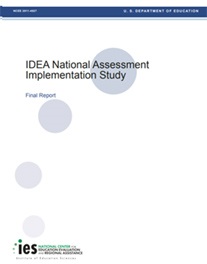 The Individuals with Disabilities Education Improvement Act of 2004 (IDEA 2004) is the most recent authorization of a law passed in 1975 to promote a free appropriate public education for children with disabilities. Funded at $12.6 billion in Fiscal Year 2010, IDEA supports early intervention services for infants and toddlers, special education services for children ages 3 through 21, and early intervening services for students not in special education but in need of academic or behavioral support.

The IDEA National Assessment Implementation Study was conducted under Section 664 of IDEA 2004 to assess the implementation and effectiveness of key programs and services supported under the law. This particular part of the study was designed to provide a national picture of state agency and school district implementation of IDEA across the Part C early intervention and Part B special education programs.