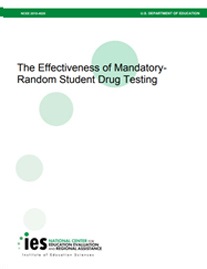 The Grants for School-Based Mandatory Random Student Drug Testing (MRSDT) Programs was authorized under Title IV, Part A of the Elementary and Secondary Education Act of 1965 (as amended by the No Child Left Behind Act). The program, administered by the Office of Safe and Drug-Free Schools, awarded grants to districts to implement school-based drug-testing programs for students to reduce substance use. In MRSDT programs, students enrolled in school-sponsored, competitive, and extracurricular activities consented to random drug testing as a condition of participation in athletics and other school-sponsored competitive extracurricular activities. The programs were designed to (1) identify students with substance use problems for referral to appropriate counseling or treatment services; and (2) deter substance use among students subject to testing as well as, through peer or "spillover" effects, other non-participating students. This study was the first large-scale randomized control trial of MRSDT and evaluated the impact of the program on student outcomes.

This evaluation included 36 high schools from 7 grantees that received awards under the U.S. Department of Education's student drug-testing grant competition in 2006. In spring 2007, a baseline survey was conducted in each school among a random sample of students with parental consent asking about substance use and extra-curricular activities. After baseline data collection, about half of the schools were randomly assigned to implement their district's MRSDT program in the 2007–08 school year. The remaining schools were assigned to delay implementation until after the following year. Data collection also included information on implementation strategies and the aggregate outcome of each drug testing event during the year.

A report, titled The Effectiveness of Mandatory-Random Student Drug Testing, was released in July 2010.