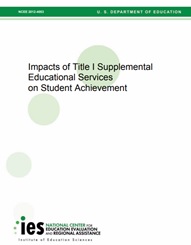 The Title I program which began in 1965 as part of the Elementary and Secondary Education Act (ESEA) targets resources primarily to high-poverty districts and schools to help ensure that all children have the opportunity to obtain a high-quality education and reach proficiency on challenging state standards and assessments. Under Title I of ESEA (as amended by the No Child Left Behind Act), districts with schools that missed AYP for a third year were required to offer Supplemental Educational Services (SES) to students attending those schools. SES offered additional academic instruction outside the regular school day by state-approved providers. Districts were required to make available up to 20 percent of their total Title I funds to support SES and transportation for students using the school-choice option. Priority for these academic support services was required to be given to the lowest-achieving students in identified Title I schools, particularly when the number of students participating in SES was large enough that costs reached the SES expenditure cap. Findings from prior non-experimental studies showed differences in individual student achievement before and after enrollment in SES, suggesting a positive achievement trajectory. This evaluation assessed the potential benefits of offering SES to applicants denied services due to limited district funds.

This study used a regression discontinuity design with student achievement measures used as a quantitative eligibility variable for student applicants within each participating district. Participating districts had more applicants for SES than could be served by the funding required by the Title I program, and services were prioritized to the lower-achieving students eligible for SES. The study included a sample of 6 oversubscribed districts and 24,113 students in grades 3–8 eligible for services across districts. Data collection included state student assessments in reading and math from 2006 to 2009, student participation in SES program information for the 2008–2009 school year, and SES service and staff characteristics information from provider surveys administered in spring 2009.

A report, titled Impacts of Title I Supplemental Educational Services on Student Achievement, was released in May 2012.