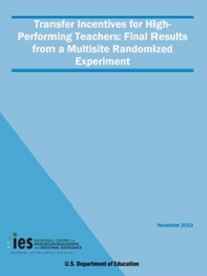 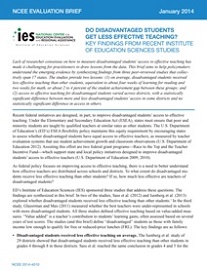 Title II, Part A, the Improving Teacher State Formula Grants program, is the primary federal funding under the Elementary and Secondary Education Act to support a high-quality teacher in every classroom. The program, funded at $2.5 billion in Fiscal Year 2012, targets high-poverty districts and funds a broad array of allowable activities such as support for certification including alternative certification, teacher mentoring and induction, intensive professional development, recruitment, retention, and merit-based teacher and principal pay strategies as well as class size reduction.

Research indicates that high-quality teachers are critical to raising student achievement in low-performing schools, but schools most in need often have difficulty in attracting and retaining high-quality teachers. This evaluation studied the implementation of a policy known to participating study school districts as the Talent Transfer Initiative (TTI), that provided incentives to identified high value-added teachers to teach in low-performing schools with high-need students.

The study was conducted in 10 school districts (168 school-grade teams in 112 schools), and the design consisted of segmenting the schools within districts to those eligible and not eligible for the treatment (the pay incentive). The treatment-eligible schools were randomly assigned to receive the treatment or not. Using value-added, high-performing teachers teaching in the non-eligible schools were identified. The two-year treatment, conducted in school years 2009–10 and 2010–11 (in 7 of the districts) and 2010–11 and 2012 (in an additional 3 districts), consisted of hiring among the pool of those identified as high performing and interested in teaching in the treatment schools. The control schools followed normal hiring practices. Program transfer teachers received a transfer incentive of $10,000 for each of the two years that they remained in the treatment school. Existing teachers in study-eligible schools that met program criteria and remained in their school received a retention payment of $5,000 a year. Data collection included measures of teacher characteristics and hiring experiences, district/school hiring experiences and practices, and student achievement obtained from administrative records.

On the TTI Program:

From a Summary of Three IES Studies of Access to Effective Teaching:

The final report, titled Transfer Incentives for High-Performing Teachers: Final Results from a Multisite Randomized Experiment, along with a video recap and study snapshot of findings, was released in November 2013.

Reports on Implementation and Impacts of TTI