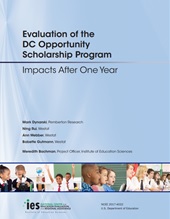 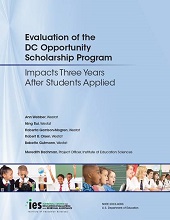 The April 2011 Scholarships and Opportunities for Results (SOAR) Act provided for a five-year continuation of a school choice program for low-income residents of Washington, DC. The program, still titled the Opportunity Scholarship Program or OSP, now provides annual scholarships of about $8,000 for grades K–8 or $12,000 for grades 9–12 to enable low-income students to attend private schools in the District of Columbia in lieu of the public schools already available to them.

The evaluation primarily compared outcomes of approximately 1,800 student applicants randomly assigned by lottery to either receive a scholarship or not receive a scholarship. Lotteries of program applicants were conducted in spring 2012 (cohort 1), spring 2013 (cohort 2), and spring 2014 (cohort 3). Data were collected for three follow-up years for each of the cohorts and for students in both the scholarship and non-scholarship groups. Data were also collected from study-administered academic assessments for math and reading, and student, parent, and principal surveys each spring (spring 2013–spring 2017).

Questions about the longer term effects of the OSP on reading and math achievement will remain unanswered, as Congress mandated that this evaluation conclude. However, a future evaluation will assess whether participation in the OSP affects college enrollment and completion. The next OSP evaluation will also focus on program improvement. It will examine how families experience the OSP and the supports they receive.