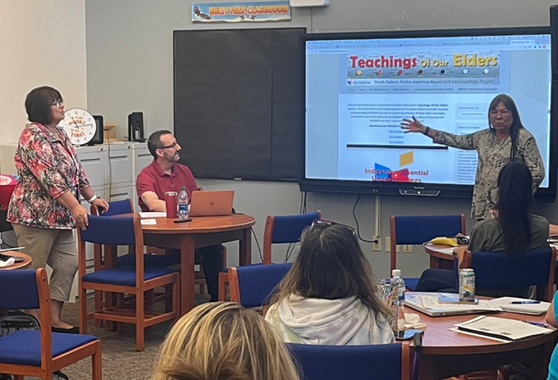 When discussing Standing Rock's needs  with Elders and leaders, it became evident that focusing attention on elementary math education was of the utmost importance. Currently, many students who attend schools on the Standing Rock Sioux Reservation do not achieve proficiency on standardized math exams (Insights of North Dakota, 2022), and leaders and Elders on Standing Rock believe this ultimately limits Native students' potential success in school and beyond.

The Strengthening Culture-based Elementary Math Education in Standing Rock Partnership is focused on creating high-quality, evidence- and culture-based elementary math modules that are relevant to students and their families.

A potential contributing factor to this low proficiency may be that Native students feel alienated by the way in which math is often taught through a "western" model, which may not fit the needs of or align with their lived experiences of how they learn in their culture, their family and/or community structures, or the physical world they inhabit. Additionally, many teachers in reservation schools are non-Native and only teach on the reservation for a short period of time, so they do not have a chance to build connections through an understanding of the lived experiences of their Lakota/Dakota students. To this end, our partners identified the need to create high quality, culture-based math modules grounded in research that build upon the strengths and are relevant to the lives of students and families, and also support teachers in applying a culture-based framework in their math instruction.

Over the next school year, we plan to hold various design circles, co-creation sessions, and community share-out events to support local teachers to develop and refine standards-aligned, elementary math modules that blend evidence-based math pedagogy with Lakota/Dakota pedagogical approaches and culture. Additionally, we are also in the process of creating a number of products to disseminate to the local community and beyond, such as fact sheets on current culture-based math education efforts and on principles for conducting participatory efforts to Indigenize schooling. We have also recently published an infographic on the overview of our partnership with Standing Rock TED and schools and Sitting Bull College.

We are already hearing from teachers from a variety of different schools on Standing Rock who are interested in participating in the design effort and the REL Central team is excited to start collaborating with them in the coming weeks.